Swords and Sandals 6 is a game created by Sky9games and programmed in Adobe Flash. It was published on Notdoppler.com on October 11, and to various other websites past October 18th.

In the Dacian Wars, a mighty Centurion led his squad against an ambush of one thousand soldiers. With victory assured, he was betrayed by one of his troops. He was framed as a traitor and a saboteur and sentenced to death in the ARENA.This is his legend. 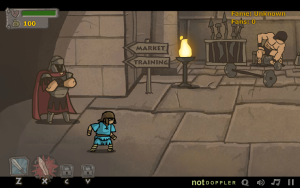 All weapons of Swords and Sandals 6