Swords and Sandals 3: Solo Ultratus is the third game in the Swords and Sandals series. People create characters from a variety of different races/characters, ranging from Human (man in the beginning when chosen, but switched to human when browsing character features or checking other races), skeletal, golem, yeti, florarisk, yeti, glamourzon and zombie. After you have created a character, you deposit skill points to 5 different slots, listed below:

You are an arena gladiator that goes to battle in an arena. You shall meet different characters in the game, also some characters from the previous game like HeChaos (arena champion now shopkeeper for helmets, shields and capes) Fallen emperor antares (final boss in SaS II: emperors reign) and The fearful prisoner (first gladiator combatant in SaS II: emperors reign). You have to defeat the arena arena champions while earning money to buy equipment to improve your gladiator. 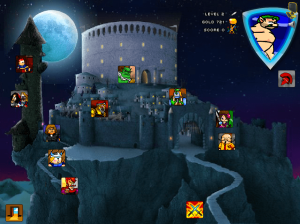 the combat in this game is turn based, with you as the first to attack the enemy. There are a few different buttons on your hotbar below the battle arena with various choices, from moving, charging, taunting, or attacking your opponent. There is also a Blue halo or a Red trident at the far left side of the hotbar, depending on your alignment.

-The character human is first named man, but changes if you choose other races)

-You can only have one arena character at a time, if you wish to play as a new character, you have to remove your old character

-The free version is found on weebly, kongregate and different game sites