Swords and Sandals 5 is a mix of fast paced arcade combat and RPG strategy. 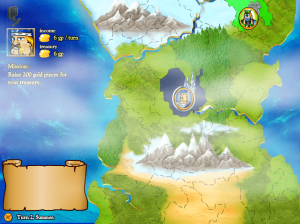 Game features eight leaders to fight against, each with unique armies and powerful new colossi, a Campaign mode with 41 missions across 9 chapters and leveling up crusaders up to 50 levels with powerful new spells, army upgrades and battle skills.

The action takes place in the land of Brandor,a land that is rebuilding after Emperor Antares’s constant sieges, shortly after the empeor had been slain by the protagonist of SaS2.One plot disadvantage is that the story is not linear,but leader-centered,this way,the real plot is presented in the first two chapters,second half of the third,and the last two chapters.(we will instead present all plots at once,guiding ourselves after the chapters).

With a mighty blow, the Emperor Antares was slain.

The impossible had become the possible.A man,a gladiator without fear, slew the dark tyrant two years ago to this day.With his defeat,his Colloseum collapsed into ruin in the dak lands of Eldor Hath.Long feared and hated for his enslavement and tyranny,his death sent a wave of joy across the realm of Brandor.

No longer would innocent men be sent to their deaths in his Colloseum,no longer would his merciless attacks on the southern lands terrorise the people of the realm.

Or so it was thought.

Our story begins far to the north, where good King Lionel,noble lord of the Lion Kingdom overhears rumours of skeletons rising from the grave and great armies marching across the moors at night.Donning his battle armour,he seeks to learn more.’

Rumours that Antares is back reached King Lionel’s ears who,after efforts of augmenting and preparing an army,goes on a journey to find out more.(because,as mentioned in the game,Emperor Antares had been defeated with a lot of effort and many allies in the past,and Lionel needed to know if to rally everyone againist Antares again)