It began, as all good adventures do, with a single hero – a pirate. After a mighty storm, his ship was wrecked and he found himself marooned on the island of Doomtrek and its brutal Arena. Desperation made him a gladiator, but he won freedom by defeating the 7 Arena Champions. 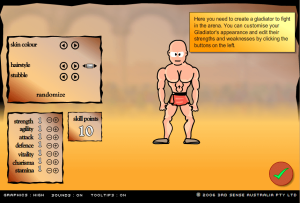 Hear the crowd roar as you take on the arena champions in this epic adventure. Unleash the hero within and become the ultimate gladiator.