Swords and Sandals 4: Tavern Quest is the fourth series of the game. Tavern Quests offers the same old one versus one gladiator fights, but with board game elements.

In the beginning of a new game, new game option is selected for the first time in the session, players can make gladiators. You have the choices to make a new gladiator, delete a gladiator, and load a gladiator with the save options. In the start of a quest, you can choose the amount of gladiators participating, the gladiators themselves, and the realm. Choosing the gladiators for the quest includes loading ones the player has already created, or editing the randomly created ones. The gladiators roll a six-sided die, and move that amount of tiles. Once the flag at the end of the chosen realm is reached, or all other gladiators are dead except one, sandals are handed out to the gladiators. Whoever possesses the most sandals at the end is the victor.

During the game, the player will go through a realm, and each of the tiles he falls into will give some benefits/disadvantages to the player or a deal.

When the game ends, a recount will be done in which the gladiators will be given sandals by their stats:

-The first to reach the flag or the remaining gladiator alive.

-The gladiator who most coins earnt.

-The gladiator who most fights won.

-The gladiator who won most gold from the minigames.

(If you picked or won a sandal during the game, this one/s will be included in the recount from the beginning)

The sounds of the arena ring out. Screams of swords cleaving into bone, day and night. Arena champions rise and fall. Only the rare few defeat all challenges in the mighty tournament that is Gladiae Ultratus. For the vast majority of gladiators who escape battle unmaimed and alive, life can be challenging. Wounds take time to heal, armour and weapons aren’t cheap and camaraderie is hard to come by in a town of scoundrels and fiends.

The “Ye olde Tavern”, on the edge of the town, proves the ordinary gladiator with solace and entertainment. A glass of ale, a loaf of hot bread and a good roast chicken to fill the belly and the world seems a better place just for a few hours. 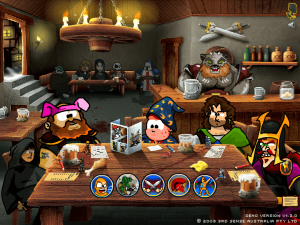 A popular new game is spreading throughout this, and dozens of other taverns throughout the realm of Brandor. A game where even the lowliest knave can be a hero. Where the weakest fool can survive a battle without injury and the cheapest miser can win pots of gold. Created by a small rounded entrepeneur known only as the Little Fat Kid, “Tavern Quests” is the smash hit game of the year.

Tonight, four past arena champions gather round the old oak table. In from the cold step and mysterious stranger who has travelled far.

This is where our story begins…