Did you have fun played Swords and Sandals 1? Want to find more challenging gladiators battle? Now, Swords and Sandals 2 Hacked Unblocked has came with new tournaments, duels, magic, ranged weapons and many others surprise that you’ve never expected in the previous game. You are playing as an enslaved prisoner in the Emperor’s dungeon who forced to have a duel in the underground arena with other prisoners. The champion of the battle will be the new gladiator. 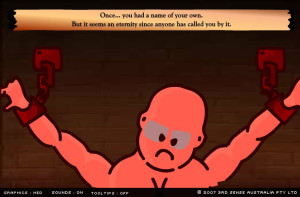 Still in the same basic premise like the first game, you are required to create/build up your gladiator character. Name your favorite character and style their appearance from skin, hairstyle, and stubble. Next, set your gladiator’s skill points including strength, agility, attack, defense, vitality, charisma, stamina, and magicka. You need to buy weapons, armour, spells, and potions to arm your gladiator in the battle. Throw down the gauntlet and defeat all the arena champions to win experiences and gold. Try different battle’s strategies that give you the highest opportunity to be the champion.

Simply use your mouse to play on your gladiator’s move. Press 1 for 888888 stamina and health, 2 for adding money to buy something in order the hack to show, 3 for adding 10 skill points to your current ones, and 4 for adding a level no more than 49 level.

Are you ready? Now, it’s time for your gladiator to show up on Swords and Sandals 2 Hacked Unblocked.