In Swords and Sandals 3 Unblocked, you will have more upgraded, fun, and challenging combat game between gladiators in the battle arena. You are a gladiator who only cares for thrill of combat, clash of the swords, and roar of the bloodthirsty crowd. You travel to Gladiae Ultratus to beat other gladiators and become the most powerful one. 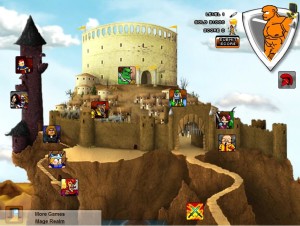 Start out the game by set your gladiator character. Choose his weight, height, species, hairstyle, name, even taunt and victory quote. Take a note, every character has strength and weakness for example tall character is good at parrying but flaw in dodging. So, have fun on having experiment your character. Next, set the number of your character’s skill points. Start out with 5 points then you will have 2 additional points in every 2 levels up.

Improve your character’s power and ability by buying stuffs including weapons, armour, spells, even musical instrument weapons, and many others from 9 different stores. Once you have ready arming your gladiator, enter the arena and defeat all the gladiators.

– Use your mouse to play and control the game.

Beat all your enemies and be the strongest gladiator in Swords and Sandals 3 Unblocked.